We are back after 10 days in Cho Oyu! Emelie Forsberg is returning home to get ready for the trail running season and I will head to Everest.

Last year, we got really inspired on how Adrian Ballinger and Emily Harrington managed to travel and climb Cho Oyu in only 2 weeks. We thought we would like to try it, and see how acclimatization affects our body and how high we could go.

We choose an 8.000m summit that approximation was accessible, so we could be there quicker than some other mountains. After racing Mezzalama and in only 3 days, we were in the Chinese Base Camp (4.900m). The next day, we climbed to the Advanced Base Camp at 5.600m. We felt good, but the weather wasn’t great.

After 9 days, on the 7th of May, we did our attempt, starting from Camp one (6.400m) at 1AM. It was a very windy and cold night. We climbed until we reach 7.500m and waited on a crevasse for the sun to shine, so we could warm up a bit. We continued an at Yellow Band (7.700m), Emelie decided to turn. The weather was supposed to get worse with heavy snowfalls, and an unequipped technical section looked too exposed to downclimb safely when tired. I was really impressed by Emelie, who was climbing really fast, and before that she had only been up to 6.000m!

I decided to carry on. The Yellow Band was more technical than expected with some thin ice and mix climbing. Around 8.000m, it started to snow heavily, and I continued from the last rocky section to the summit plateau. I continued climbing without any visibility towards what I thought would be the summit. The summit of Cho Oyu is not a shaped one, so at some point I reached something that would be the summit. Honestly, I am not sure that this was the summit as I could only see my feet, but I was at some point around. Very happy with that! It was 3PM.

I didn’t wait any longer and started going down. I took an old rope from the mountain and fixed an abseil down the steeper part of the Yellow One so I could climb down. I arrived at Camp One at 6PM. Emelie had already packed our tent and climbed down. It was freezing and I drank some hot drink that an alpinist lend me. Afterwards, I descended to the Advanced Base Camp, where Emelie was waiting for me. It was such a great day in the mountain! The following day, we hiked down to the Chinese Base Camp and drove to Tingri.

I want to thank our cook from the base camp who cooked us great food. Also, the 8 other climbers on Cho Oyu; I hope you will all have good luck and get to enjoy the views I didn’t have from the summit! Finally, thanks to Emelie, my best partner in life and also in mountains. It is hard to find someone so hardcore to do this trips and being always so strong! 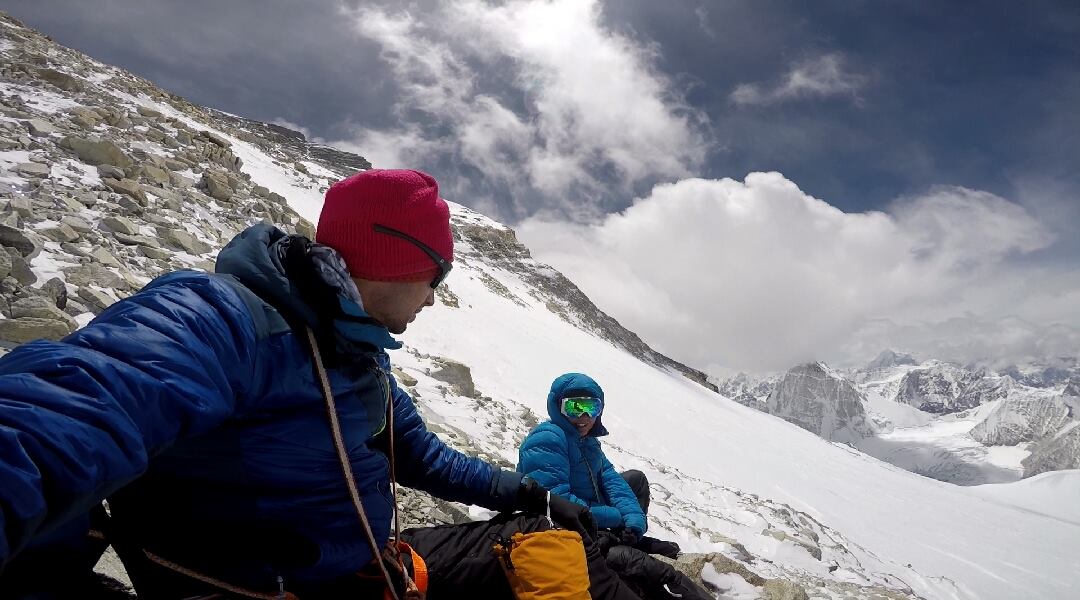 One trip to the Himalayas, two challenges